In November, KPI welcomed students from Virginia Tech University (VT) to Gatagara Rwanda. VT students made a huge contribution during their 4 week stay by collecting data via questionnaires, interviews and focus groups to assess our Let’s Play Fair program. A compressive evaluation will be done between 2 target groups; KPI children and their families and non-KPI children and their families. VT students surveyed KPI players to assesses their knowledge, attitudes and actions as they relate to Gender Equity and our Fair Play Skills in sport as well as at home or in daily life.

This same survey was administered to non-KPI players during 3 special community days. Both KPI and non-KPI players and families were invited to community day, but on each of these Sundays, players participated in experimental games that were intentionally designed to test the players’ Fair Play Skills. For example, during one game called Hot Coals, players had 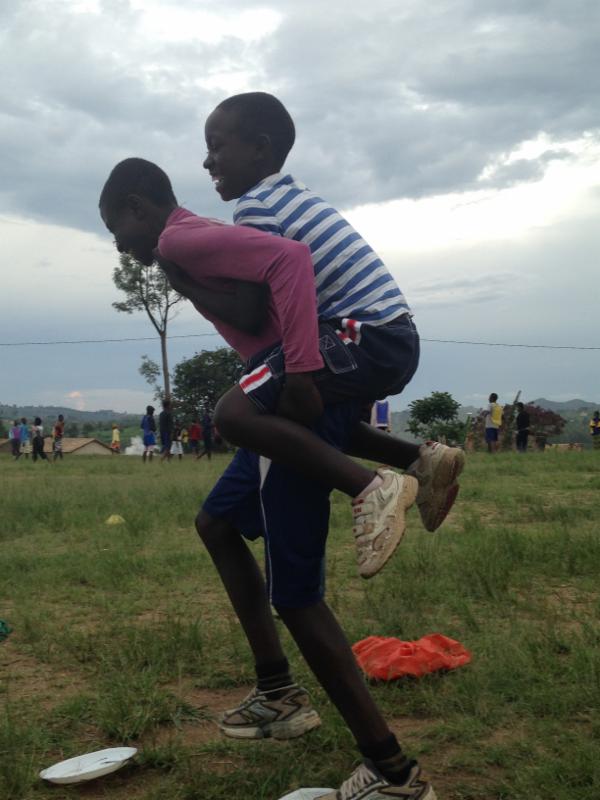 Players working together and getting creative to cross the hot coals!

to imagine that they were walking home from school and all of a sudden, they came to part of the path that was covered with hot coals. The 10 players were given 7 paper plates or “stones” and had to use the stones to walk across the path without burning their feet on the coals. This game required players to work together and communicate as a team. Each of these games was recorded and VT students worked with a translator to code each behavior by students as positive or negative and categorize the behavior into one of the five Fair Play Skills.
In addition to the studies being conducted with players, VT students interviewed parents of KPI and non-KPI players and gathered information about their perceptions of KPI and asked them about the frequency with which their children acted out the Fair Play Skills at home. This study will allow KPI to measure the difference between KPI players and non-KPI players and their tendency to act out the Fair Play Skills and gender equity in daily life.
VT staff is in the process of an analyzing the data and will have a full report prepared in early 2016.  Stay tuned for the results!